Sue and I have been visiting Mallorca for many years, for a mix of chilling and cycling . After a two year forced absence October seemed a good time to return, Covid restrictions being a bit easier, but before the predicted “winter surge“ not to mention our concern that our much rolled-over airline tickets would expire.

Still there is plenty of bureaucracy, not to mention passport control to remind us that while we are personally welcome, officially we are now distant cousins. By all accounts Mallorca has been relatively Covid free so it was reassuring to observe that the health controls were strictly applied, even for us arriving on the last flight of the day. At our hotel the owner had been an early Covid victim, spending 72 days on a ventilator. Although now officially recovered, he is a daily reminder of what a toll this disease can take on ones body. The law was for masks to be worn indoors. There was no visible enforcement, but was respected by almost everyone. This apart, there were no other restrictions. 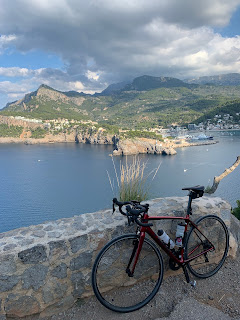 We stay in Puerto de Sóller surrounded by mountains. It’s not everyone’s ideal cycling base, given the minimum 500m climb to leave the town, not to mention the return. But I don’t mind the climbing, and it does have a super bike hire shop, with bikes to suit almost any taste. My first ride is a Trek Emonda SL6, nice and light, though the 11-28 gearing gives me an extra challenge.

Sóller is on the route of the Mallorca Moonpig Audax, a 130km tour of the island’s biggest climbs, totalling 2,800m. I have ridden it a few times, but the last time was 2 1/2 years ago so I’m unsure if I’m up to the challenge. Day one cycling is therefore a combined 100k recce and fitness test for the real thing planned for day two. Thankfully my legs were ok, and the various cafes and pit stops I had used before had survived.

Riding in Mallorca is a revelation. Roads are mostly silky smooth surfaced and potholes rare. But above all motor traffic is light, and almost always courteous. Climbs can be long, but gradients gentle by Surrey standards; mostly 6% to 7%. 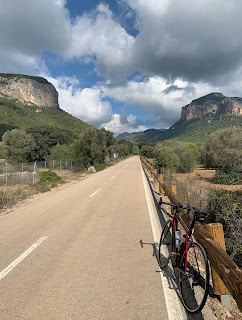 Cyclists were on the road almost everywhere, in groups or solo, fast or slow. In the past I have found many dourly introspective, but now most wave, nod or smile, doubtless thankful to be out at last enjoying what they like to do best.

An early finish to my 100k recce meant there was time in the evening for a visit to hear local guitarist Damià Timoner play his regular gig in a nearby hotel. He plays mostly his own compositions as well as arrangements of popular songs. The location is tranquil, a nearby hotel, converted from a huge c17 stone farmstead. Normally in summer he plays outside surrounded by ancient olives and carob trees. If you are lucky the local slow worms and geckos turn out. He plays for 90 minutes nonstop and for that time you can believe that the world is indeed a wonderful place.

Back to cycling, and day two is the day of the Moonpig challenge. Mornings start late at this time of year so an 8am start is before the sun has shown itself over the mountains. But it’s warm enough, dry and almost windless, so perfect riding weather. 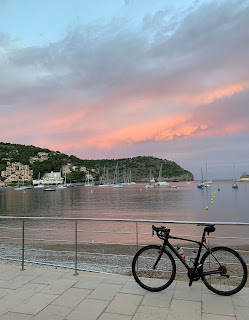 The first climb, around 800m goes well, I think probably my quickest ever, doubtless due to the lower gearing on this Trek Domane rather than my fitness. 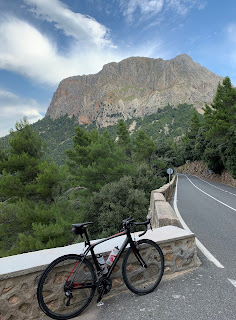 Time for a coffee before the next leg, a 40k round trip, first descending to sea level at the cycling Mecca at Puerto Pollença, turning round and climbing back to the coffee stop. It’s a bit of a drag but at the top about half the day’s climbing is done. Time for lunch. The place is the isolated Petrol Station atop the Coll de sa Batalla, a sort of crossroads for Mallorca cyclists, and an ideal place for rip-off cafe prices. But to my surprise a freshly made tuna baguette and a big bottle of water costs just €4. And it comes with a bowl of my favourite Sóller olives, reputedly so bitter that they cannot be sold in the rest of the EU. Wonderful. 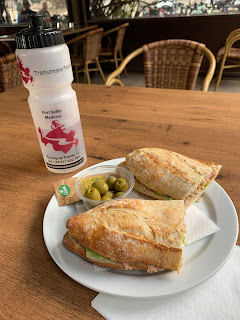 The lunch is ideal fuel for a long descent, where the only concern is to wear just enough clothes to be comfortable both at altitude and lower down where the warmth is welcome. You are now in undulating farmland, with dry stone walls surrounding fields of almond and olive.

Thankfully the big climbs are over for today, just three colls around 500m each. But it’s the tiny Coll de Tofla at 260m, barely higher than Leith Hill which is for some reason the biggest mental challenge. At the top I can sense that the end is in sight and I feel good. The final climb up the Coll de Sóller takes me 40min, my slowest ever; a few years ago I would be disappointed with a time of over 30min, but now I know it’s downhill all the way home.

The descent has some technical bits, and can be damp even in the afternoon, so I’m cautious. The Domane has a slight tendency to oversteer which is odd, perhaps it’s the suspension, or the gradient, or perhaps it’s just me. Anyway I get back just fine and I’m happy with my time of just under 9 ½ hours. I believe I have ridden more Moonpig Audaxes than anyone else, which is a kind of record.

Day three of cycling I decide to head south along the coast to Andratx. There are a few colls on the way, but the coastal views are superb, and the roads quiet; it’s away from the main tourist areas, and even most cyclists don’t come here as it’s a bit far from the popular cycling base at Pto. Pollenca. 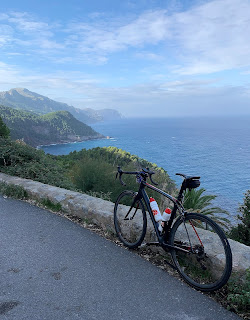 There’s a tailwind too, but that’s no help when I turn for home, and it’s cold, blowing from the northeast. Normally I wander back through the inland lanes, but today I decide to shelter in the hills. Which brings me to the climb to Es Verger; this is a real back road, and as it gets steeper the surface becomes atrocious. Garmin consistently says 17% but when it hits 20%, I’m walking. Finally I’m at the top, 530m and the highest point of the day. 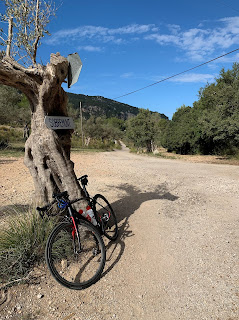 A bumpy descent follows. I met only one cyclist, and he was coming the (easier, I believe) way from the north.

Before the final climb up to the Coll de Sóller I need refreshments. There’s the delightful town of Bunyola ideally placed, with several cafes. Unfortunately the traditional bakers which I have visited for delicious ensaimadas and other delicacies, is closed. But there’s a small supermarket where you can get the next best thing, a packet of cakes. They appear to be composed mainly of hydrogenated vegetable oil and super refined sugar, just what I need right now, and they are very cheap. I down a couple, put the rest in my pocket for later, and have a nice coffee. Now I’m prepared for the final climb. It still takes 40 minutes, so no great fitness gain since the previous ride, but no matter. I get back to find I have done more climbing even than the Audax, and it certainly feels that way.

Tomorrow I will settle for Sunday lunch with Sue and a stroll round the harbour to admire the boats. There’s no chance of going anywhere as the roads will be closed for the Mallorca 312k sportive, displaced from its normal April date. I have huge respect for these riders taking on more than twice my distance and over 5,000m of climbing at competitive pace. But I do permit myself the smug thought that they won’t be climbing Es Verger.

On this trip I have ridden over 350k and heard no horns blown, no abusive rants, and only one close-ish pass. What is it about UK drivers which makes them so abusive?

The final day is reserved for Covid bureaucracy, form filling for our return home. It’s been a great few days, and doubtless much of my feeling of wellbeing will be erased by a day spent in airports and plane, but there will remain a warm feeling that things can be better.