Well, that must be one of the shortest tours ever.   I rode down to Marlborough (1 mile?) and stopped in a coffee shop to consider my options for travel home, over a bacon sandwich.   Bedwyn was a few miles south, but entailed heading back through the Savernake Forest, which I'd done yesterday.   It was quite muddy yesterday, so I decided to go to Hungerford, only 9 miles east along the A4.   The A4 was pretty quiet and wide enough for traffic to pass with plenty of room.   And no ice.   I had my fourth coffee of the day in Hungerford, and then hopped onto a train back home, feeling a bit sorry about abandoning the trip but knowing it was the right decision.

Thank you for all the comments on the blogs, both encouraging and also confirming my decision to stop!

* according to Garmin Connect

Well, I've learned a lot about winter cycle camping already.  I had a good night and stayed warm, with a clear sky, a full moon and ever changing constellations of stars above me whenever I opened my eyes.  Also a few aeroplanes and a shooting star!  I didn't  see any bears, wolves or slugs.  When I woke it was already half light, with a fearsome frost on everything.  I treated myself to a hot coffee and a peanut butter bagel.  So nice that I had another coffee. 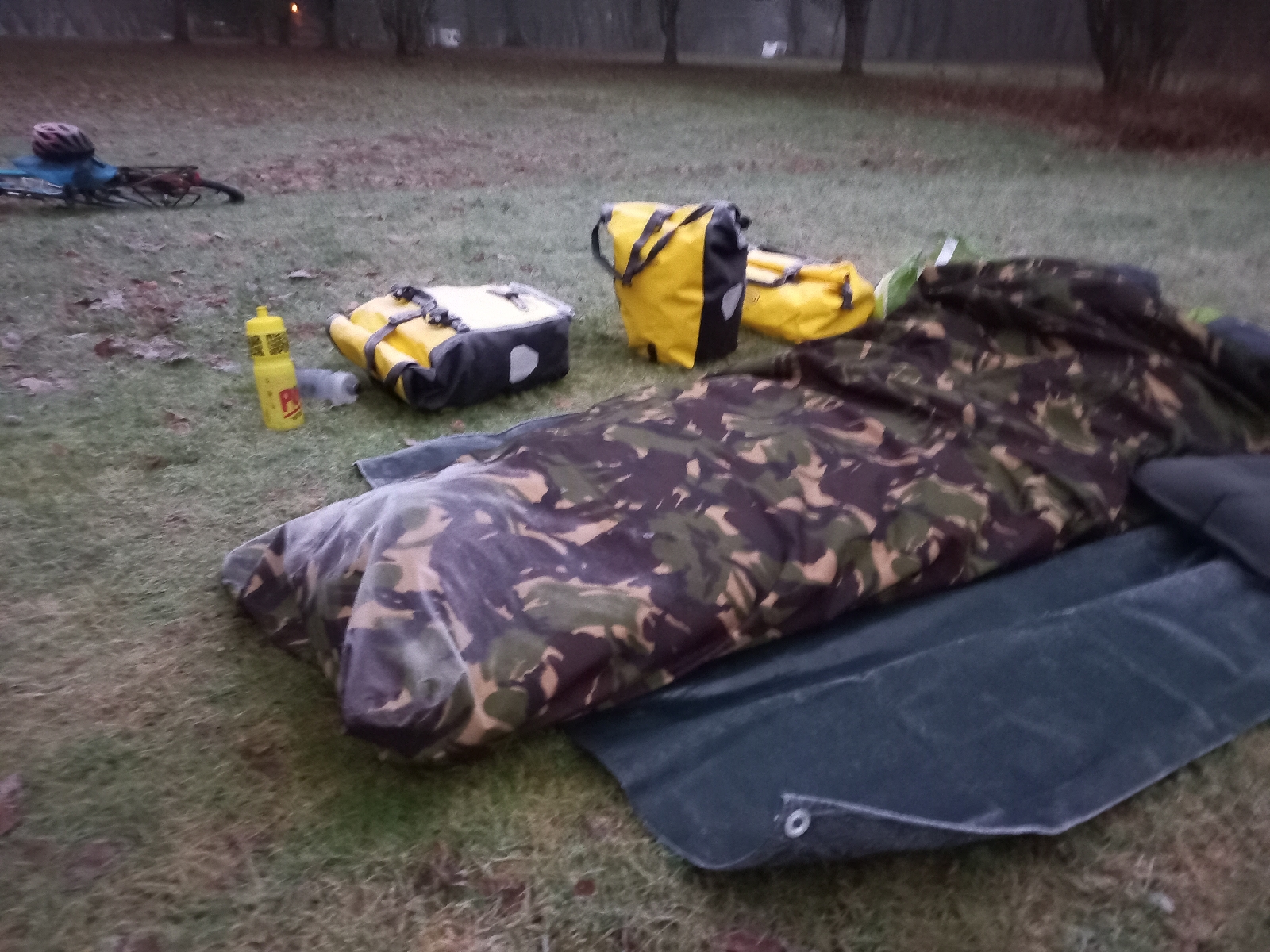 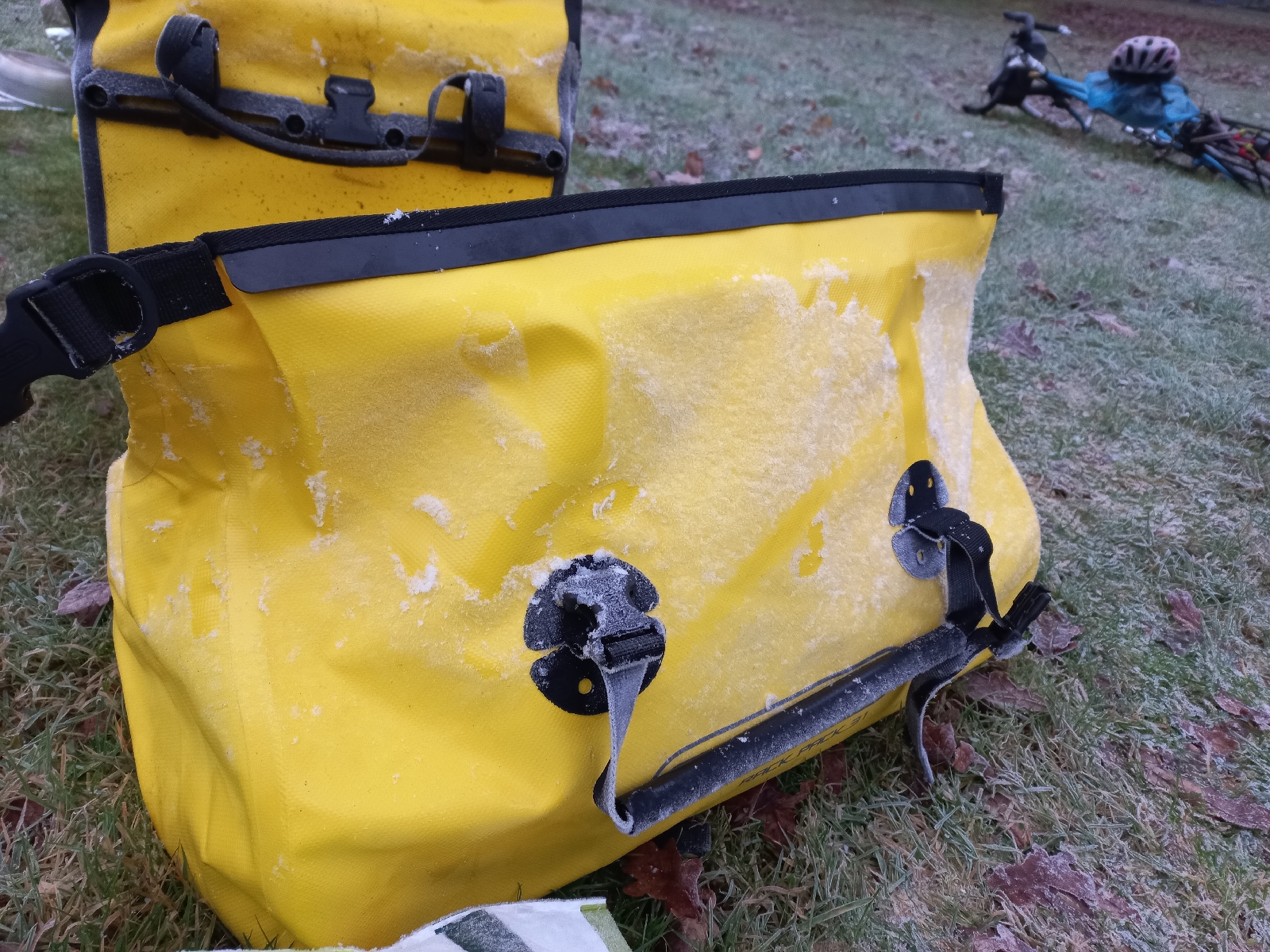 Frosty panniers
But - you can't  really do anything in the dark, even use the phone, as it's  too cold to put your hands outside the sleeping bag.  By the time I was ready to ride it was 10am.  I realised that I couldn't  keep to my original plan of a 60 mile ride today. There just aren't  enough daylight hours to pack/unpack the camping gear, eat properly, write something  for the blog, stop to take photos, and ride, especially with a loaded bike.  There were also a worrying number of frosty or icy patches on the roads yesterday.  So, unfortunately  I've decided to abandon the trip for now.  Longer daylight hours would make a massive distance.  Or not camping, of course.
Posted by Simon L at 11:16 5 comments:

A night in the forest

As I write this, I'm lying on a grassy patch in the Savernake forest, looking at the stars.  Just a bivi bag, the Centurion sleeping bag, another sleeping bag, two sleeping mats, and several layers of clothes to keep me warm and dry.  It's 6pm, it's dark so it must be bedtime. 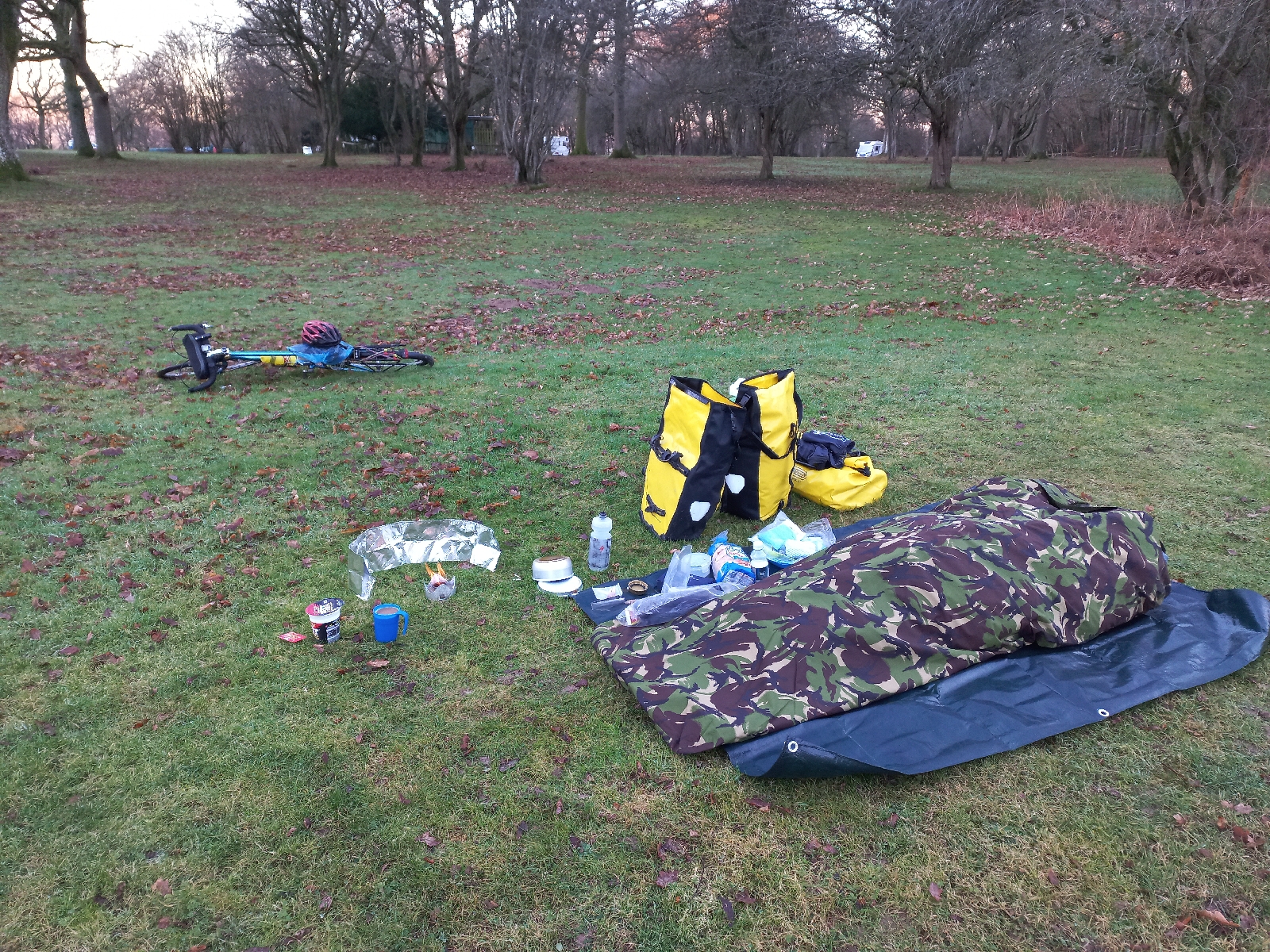 Today was a lovely ride, pretty hilly and tiring though.  I didn't have enough time to stop for lunch as I wanted to get to the campsite before dusk, which I did.  There isn't  enough time in the short days to do 60 miles with a heavy load and have a couple of stops (breakfast? Lunch?) and finish by dusk. 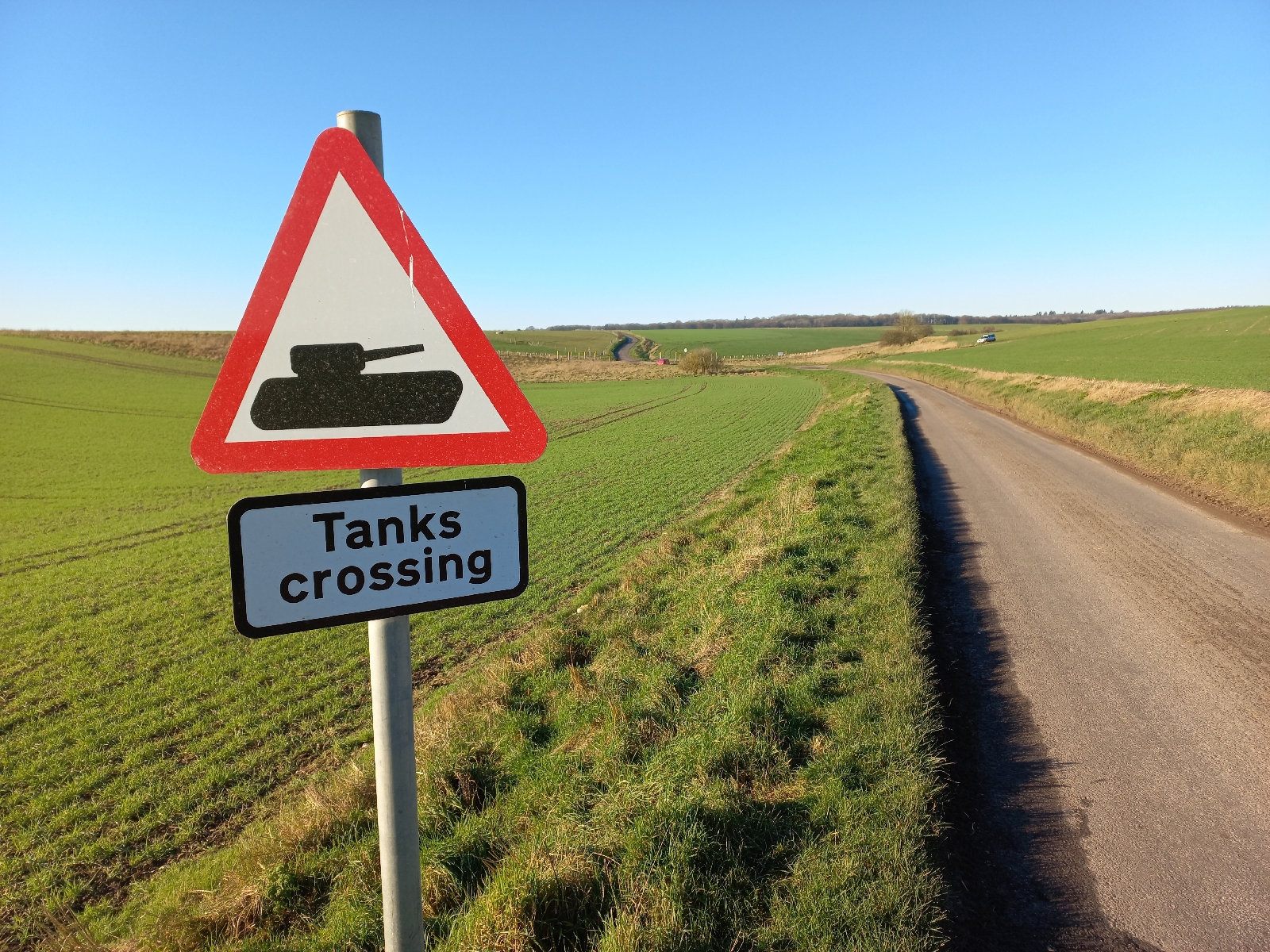 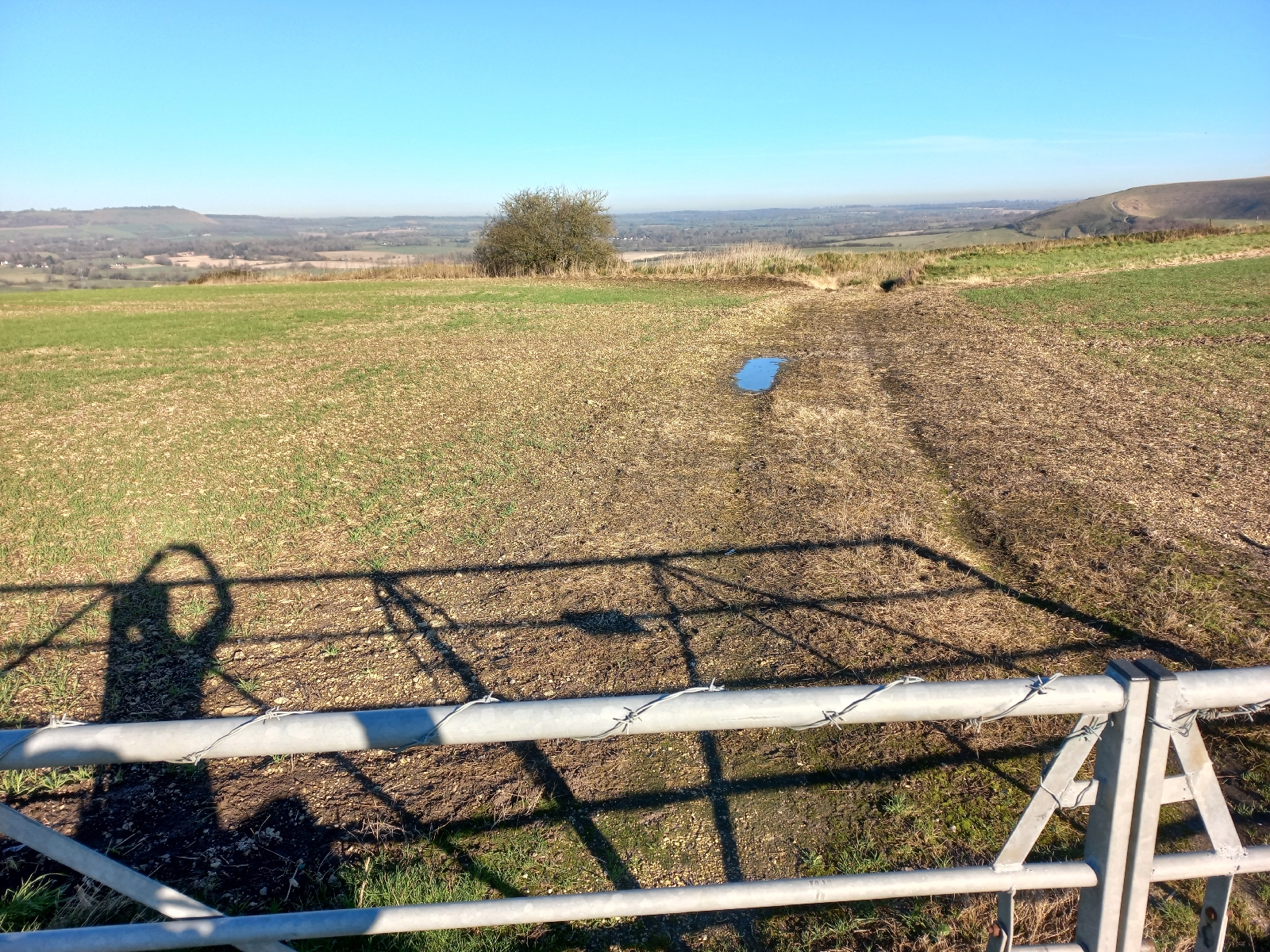 Crofton beam engines - pumping water into the Kennet & Avon canal, I think
Countryside was lovely, big open spaces with many tank crossing points, all the way up to the Vale of Pewsey .  Then different; smaller scale with sunken lanes and big hedges, more like Surrey or Devon.  Mucky roads too, at one point I had to ride through a big patch of muddy water right across the road, about 4 metres long, but luckily got through without having to put a foot down.
Bike handling is - interesting  - with the Centurion on the back.  You can't  swing your leg over the saddle.  When pushing the bike, it behaves more like a wheelbarrow than a bike, which can be tricky.
More tomorrow...,  if I haven't  been eaten by bears.
Posted by Simon L at 18:00 No comments:

I rose at 3.43 to catch the first train.  There was a heavy frost, and the lock to the bike shed was frozen solid - not a good start.  But I was soon on my way to Surbiton  on well gritted roads for the train.  Surprisingly  there were as many cyclists as cars at this unearthly hour.  The temperature recorded by the Garmin was falling as it adjusted to the outdoor conditions.  By Kingston it was showing minus 0.5C, and I was too excited  to look after that.  Much colder at Woking, where I changed for Andover 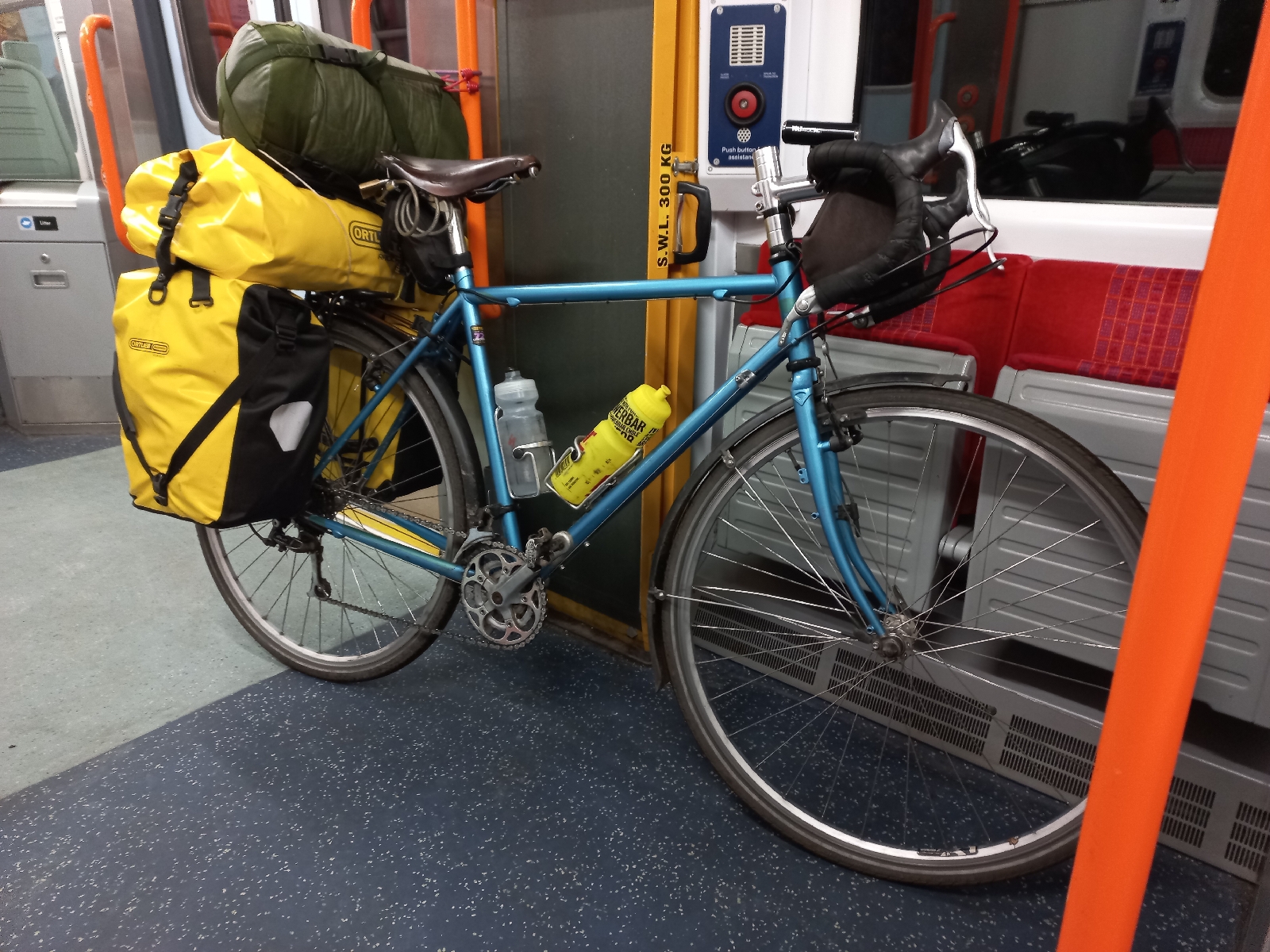 My luggage focuses on staying warm, and what with food and cooking equipment, is surprisingly  voluminous.  I have a lot of merino wool stuff for day & night time, and many over-layers.  Two sleeping bags, including a bulky ex-Army bag which is nearly the weight of a Centurion tank.  The packing arrangement is not ideal but it's a learning opportunity.
Dawn was stealing over the horizon, oily layers of red, orange and yellow supporting a pale cloudless sky above mist and frosty fields, as I chugged towards Andover, a few miles outside the Wiltshire border, arrining at 7.45, ready to start.  (Impossible to photograph from a brightly lit train unfortunately.)  My destination tonight is a forest near Marlborough, but first... I had 50+ miles to ride through quiet lanes, before sunset at 4.15.  It was still cold, and there was no rush,   so I stopped for a mid-morning coffee. 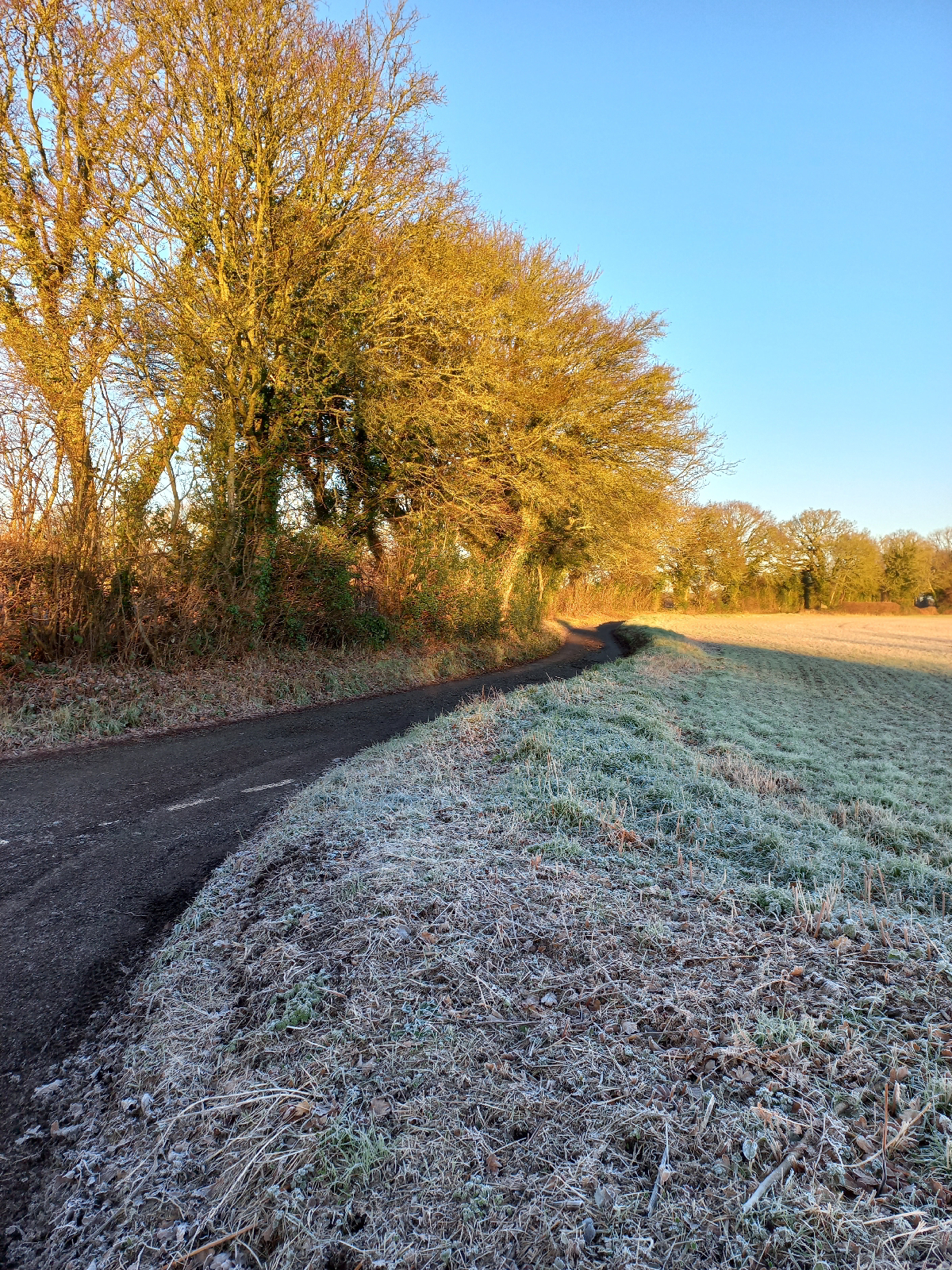 The sun came up over a winter wonderland as I left Andover, and I was instantly on deserted roads, with the odd thatched cottage or farm every do often.  The rising sun cast a pink glow on the frosted hedges. It was beautiful,  but the wrong sort of beautiful:  I was still in Hampshire, but not for long.  The temperature was now -2.7 degrees.,  but it soared to nearly +1 after a bit, and I had to take one of my many layers off. 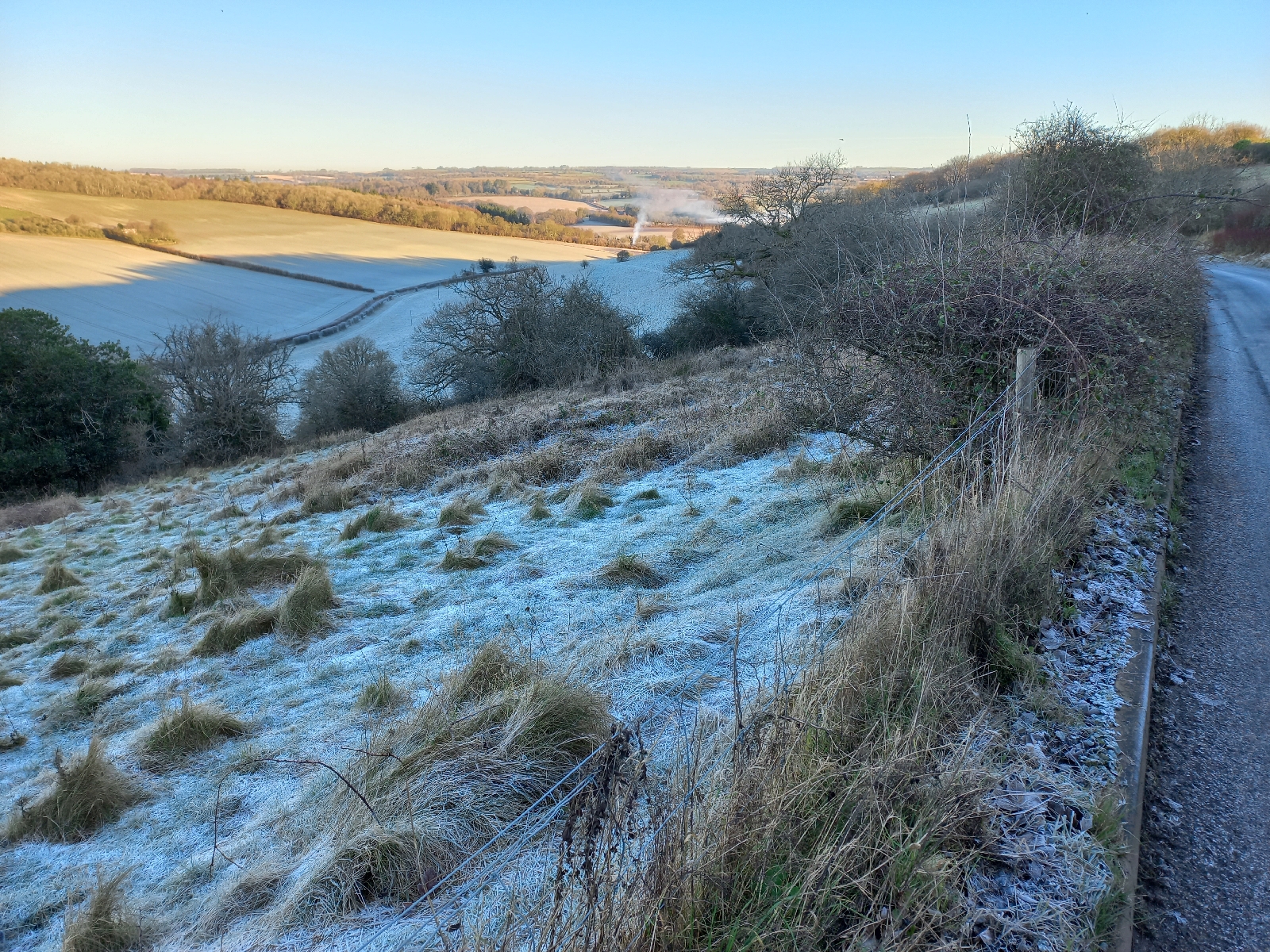 The morning's ride continued (carefully) with the odd frosty patch on the empty lanes, a few hills and plenty of vast views into the distance.  A group of deer standing in the middle of a field, ran off when I stopped to photograph them.  After so long, I remembered the pleasure of exploring  somewhere new.
No villages to speak of for 20 miles until Ludgershall,  well known to regular A303 drivers.  I was expecting a post office and a castle, but was delighted  to find Mary's Vintage Tea Room, just in time for elevenses. 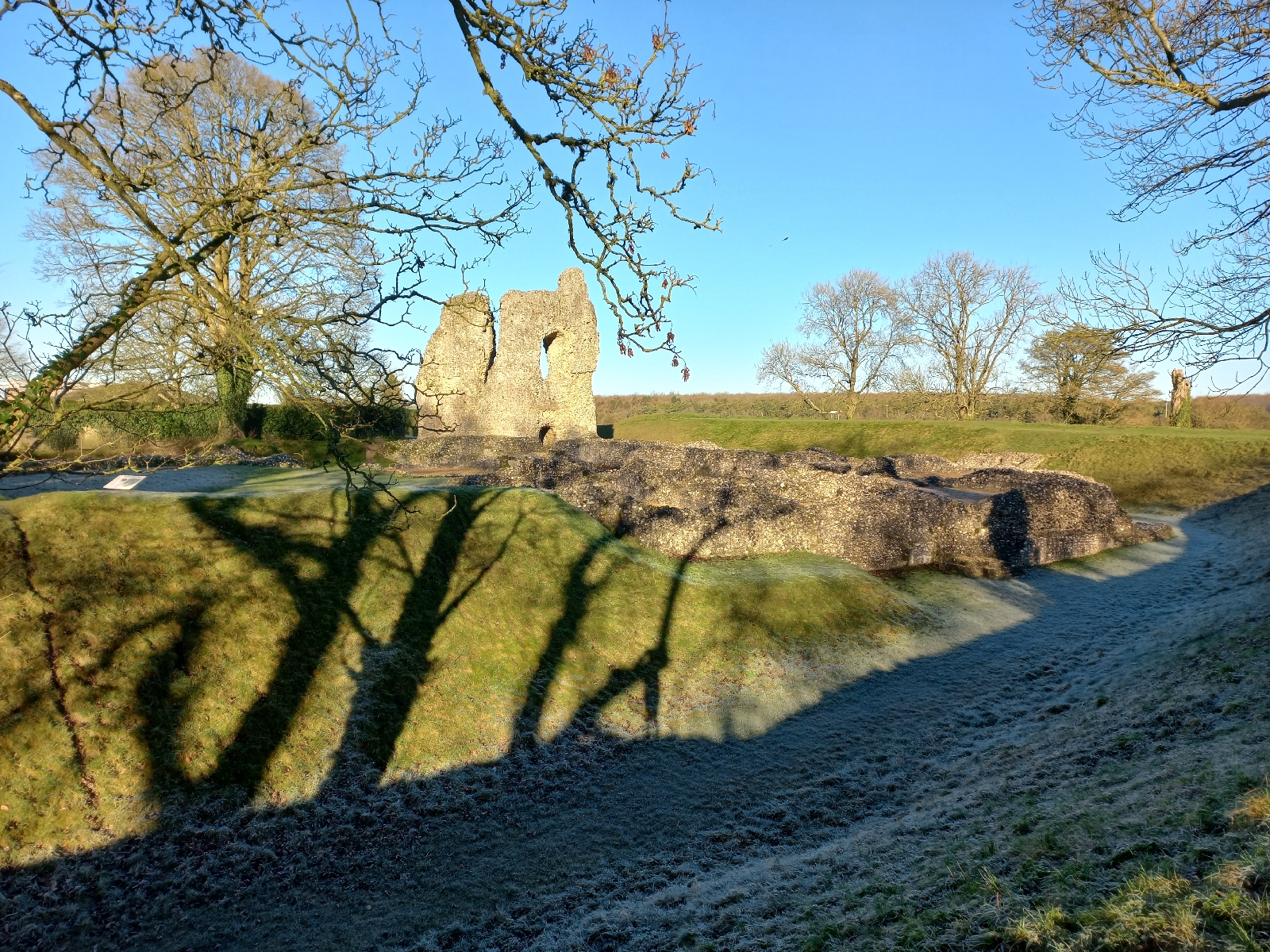 Ludgershall castle, built by Henry VIII
Posted by Simon L at 17:35 No comments: 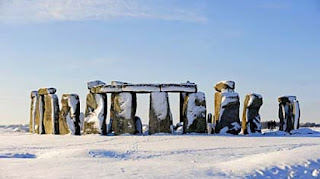 I haven't been able to continue my coastal tour for two years now, because of difficulties in getting somewhere to stay.  So I decided to do a Covid-resistant tour which doesn't depend on youth hostels (only whole-room or whole-hostel bookings available) or B&B (Covid cleaning means they dislike accommodating one person for one night even more than usual).

I thought I would challenge myself by doing a winter tour, camping.   Something I've never done before.   There are a few possible challenges:   It's cold.   The days are short.  There might be mud.  Also, I like the idea of not using a tent: maybe just a bivi bag?

I decided to ride around Wiltshire for four days, starting this Friday 14 Jan.  I can get there & back by train.   Campsites are few and far between, especially at this time of year, and they are not that near to places to eat, so self-catering may be required.   Possibly in the dark.  On the plus side, the camp sites are unlikely to be fully booked.

What could possibly go wrong?  Well, if I never try, I won't find out. That's what adventures are for.   I'm a little bit scared, but in a good way.   As I write, I have a mountain of stuff to take, just in case.   No idea how to fit it onto the bike, and I'm definitely not going to weigh it.

I'll try to post on this blog each day, maybe with a picture or two.   If you're interested, check back here to find out how it goes.